"Natok" (Drama in Bengali), is an integral part of Bengali culture and the Toronto Bengali Drama Group, or TBDG, was founded in 1979 with the intention to keep this spirit alive. TBDG has spread this culture and passion in Toronto and in other North American cities actively through production of seasonal plays of different categories, involving a wide range of age groups. Certainly the prime intent is to keep the language and the social values alive by engaging Bengalis of the next generation.
Kalyan Banerjee was the principal founder of the society. A number of his local Bengali friends who shared the common vision joined ‘Kalyan da’, as he was universally known, to experience the pure enjoyment of "Natok'' without any political overtones. The effort was met with great enthusiasm with encouragement from the local Bengali community. The dramas that were produced in the early years were mainly enacted by and for adults. "Tiner Talowar" (Tin Sword) was such a production that was staged in 1981-82. "Noti Binodini" (Dramatist Binodini), the famous play originally written and produced by the Great Bengali playwright and actor Girish Chandra Ghosh, was also one of the famous plays produced by the TBDG in 2000. Although only Bengali plays were staged initially, later on English plays and also children's plays were performed.
Yorkwoods Library Theater has been primary venue for these plays since 1979 and an April program at this location has become an annual event that people look forward to. Several famous plays were enacted here, including "Shah Jahan" and "Cham Cham Kumar" in 2002 and 2013 respectively, "Jome Manushe" (Yama/God of Death vs. Man) in 2003, "Rajar Oshukh" (King's malaise) in 2007, "Shubarno Onguli" (Golden Fingers) in 2011, "Macchi" (The Fly) in 2012, and Girish Karnad’s period play “Taledanda” in 2015. The Group marked the debut of the musical genre through the original production of "Kichhuta Shure Kichhuta Dure" (With A Little Melody, At A Little Distance), at the 2013 Toronto NABC Meet. This was closely followed by “Gupi, Bagha ebong”(2016), a musical street play with actors singing live songs supported by a band on stage and by “Miss You Kolkata”(2017), a live band with drama enactments that was staged at multiple events by other cultural organisations around GTA.
In 2014, TBDG celebrated its 35th anniversary with a grand festival of drama including several productions over two days. Famous theatre personality from Kolkata (India) stage, Deb Shankar Haldar, was present during this event and staged his own one act play in front of the Toronto audience.
Recently, a TBDG production, “Umbrella”(2017) was awarded with multiple honours including best play, best actor and best director in a drama competition representing multiple theatrical groups in GTA. A number of the society's dramas were also enacted outside of Toronto, including Ottawa, Montreal, Kitchener and parts of the USA.
Drama or Natok has always been a source of pride for Bengalis for several hundred years providing intellectual stimulation through an opportunity to showcase creative and joyful entertainment and TBDG hopes to keep this tradition alive. 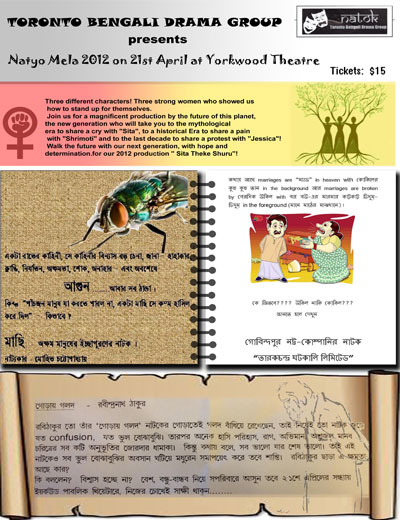 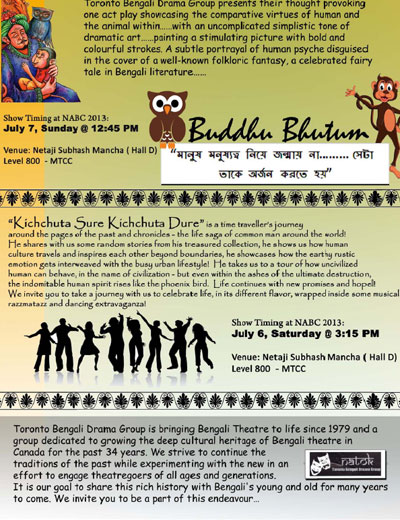 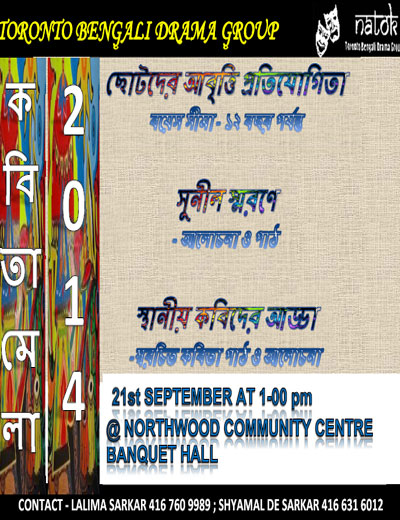 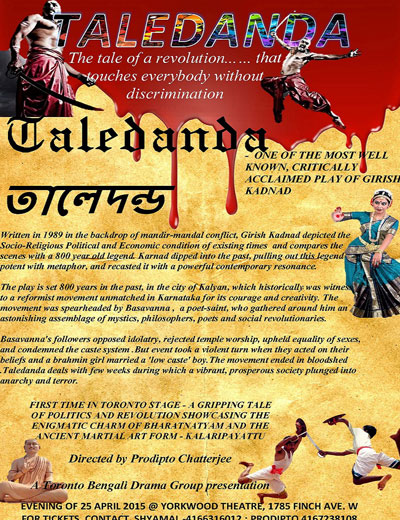 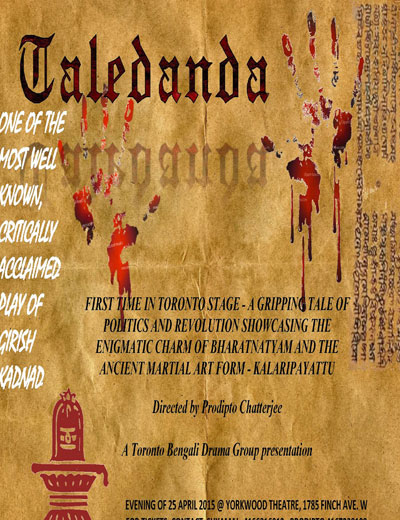 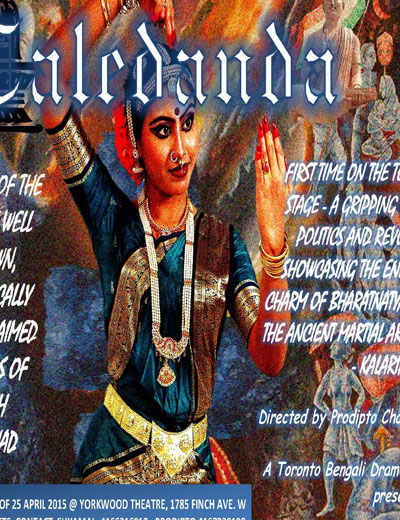 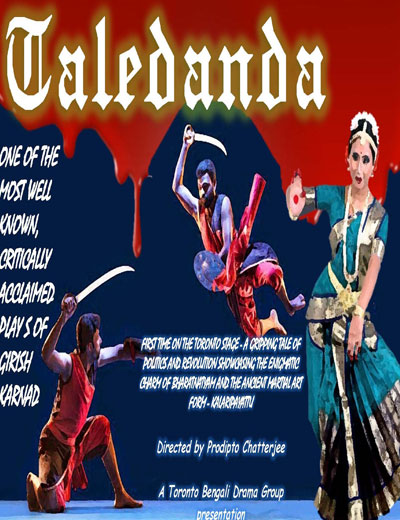 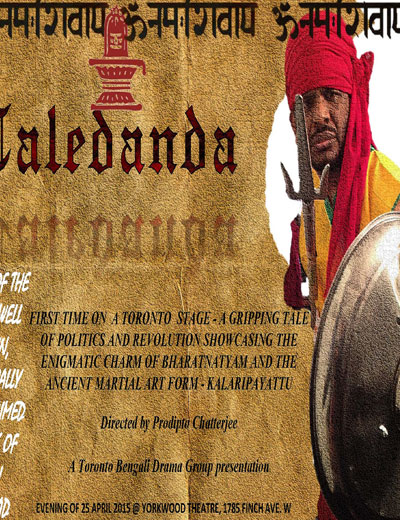 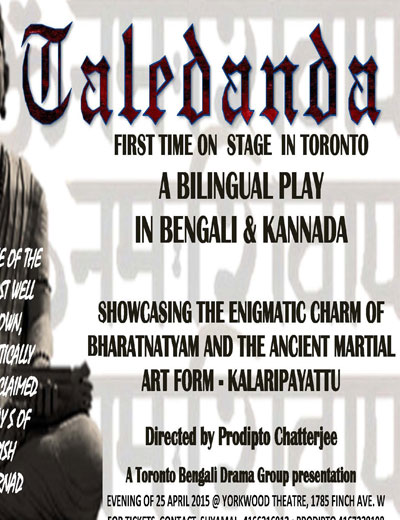 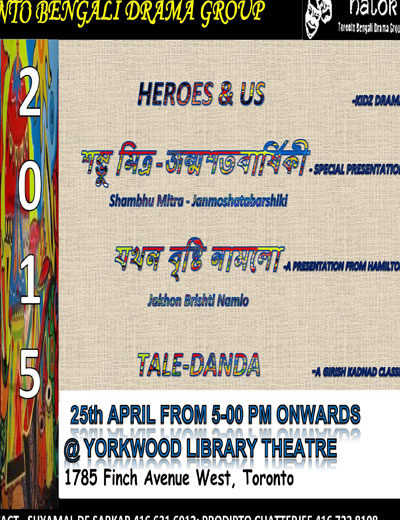 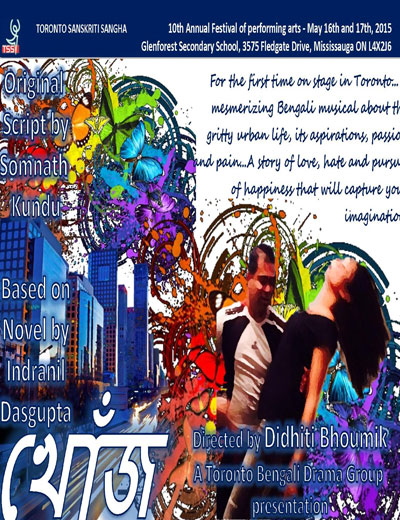 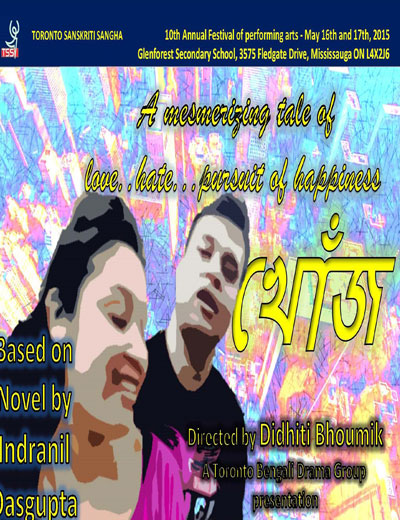 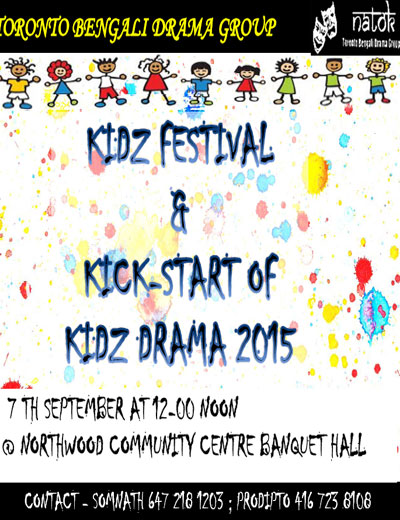 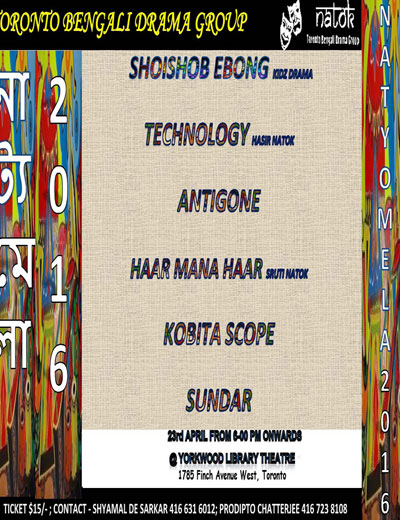 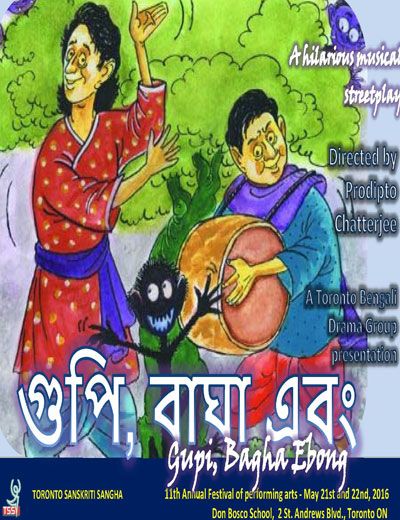 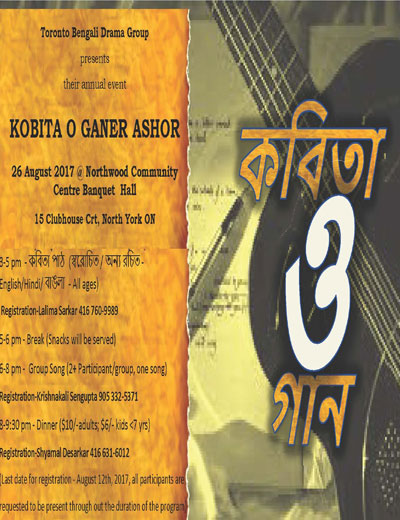 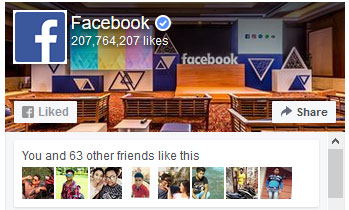